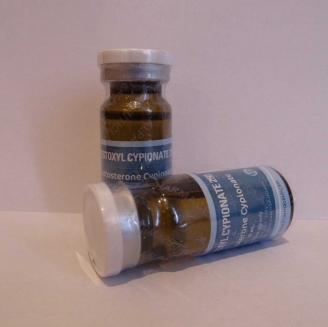 Testoxyl Cypionate is manufactured by Indian company Kalpa Pharmaceuticals. This steroid is designed for quick gain of quality muscle mass. In this article we will discuss on how to use it and how to combine it with other anabolic/androgenic steroids.

Testoxyl Cypionate is drug of anabolic and androgenic spectrum activity. Produced in India. On production is engaged Kalpa Pharmaceuticals company. The active ingredient of the drug is Testosterone Cypionate. Sold in the form of an injection. One factory package is containing 10 mL of the drug at a concentration of active substance by 200 mg/mL. The long carbon chain, makes it a drug of prolonged action. Its effect persists after completion of the cycle. However, Testoxyl Cypionate can cause water retention. The drug is often included enough in combined cycles. It is particularly effective in quick gaining of quality muscle mass. At present, Testosterone Cypionate, the price of which is quite acceptable, is considered one of the most popular steroids, for beginners and experienced athletes.

According to the effects of Cypionate, it is little different from the usual testosterone. Testoxyl Cypionate is also able to increase libido and correct sexual behavior. The only drawback of this drug is the high degree of aromatization. In order to avoid the accumulation of estrogen, you need to choose the right post-cycle therapy.

In general, the vast majority of athletes respond positively to the drug. First, they note a significant increase in strength and endurance. Muscle mass is added gradually, since Testoxyl Cypionate refers to sustained release preparations. The drug causes an increase in sexual desire. Some athletes notice rollback phenomenon, which is most often associated with non-compliance with the manufacturer’s recommendations.

Testoxyl Cypionate can be taken in short cycles, and on long cycles. Minimum cycle is about a month, the maximum – three months. Selection the duration of admission is on the basis of individual performance. Recommended dose starts from 200 to 500 mg per week.

In the cycle of a month, particular PCT is not required. Only anti-estrogens. If the cycle lasts longer than a week, you need to take Gonadotropin (HCG 5000 IU, Pregnyl HCG, Fertigyn, HuCoG 10000 IU, HuCoG 5000 IU), 500 IU weekly dose.

Combination With Other Drugs

Testoxyl Cypionate solo is considered sufficiently effective. However, it can be combined with other testosterone esters. The most effective combination is with Nandrolone Decanoate. In this case, cycle duration is reduced to 6-8 weeks.